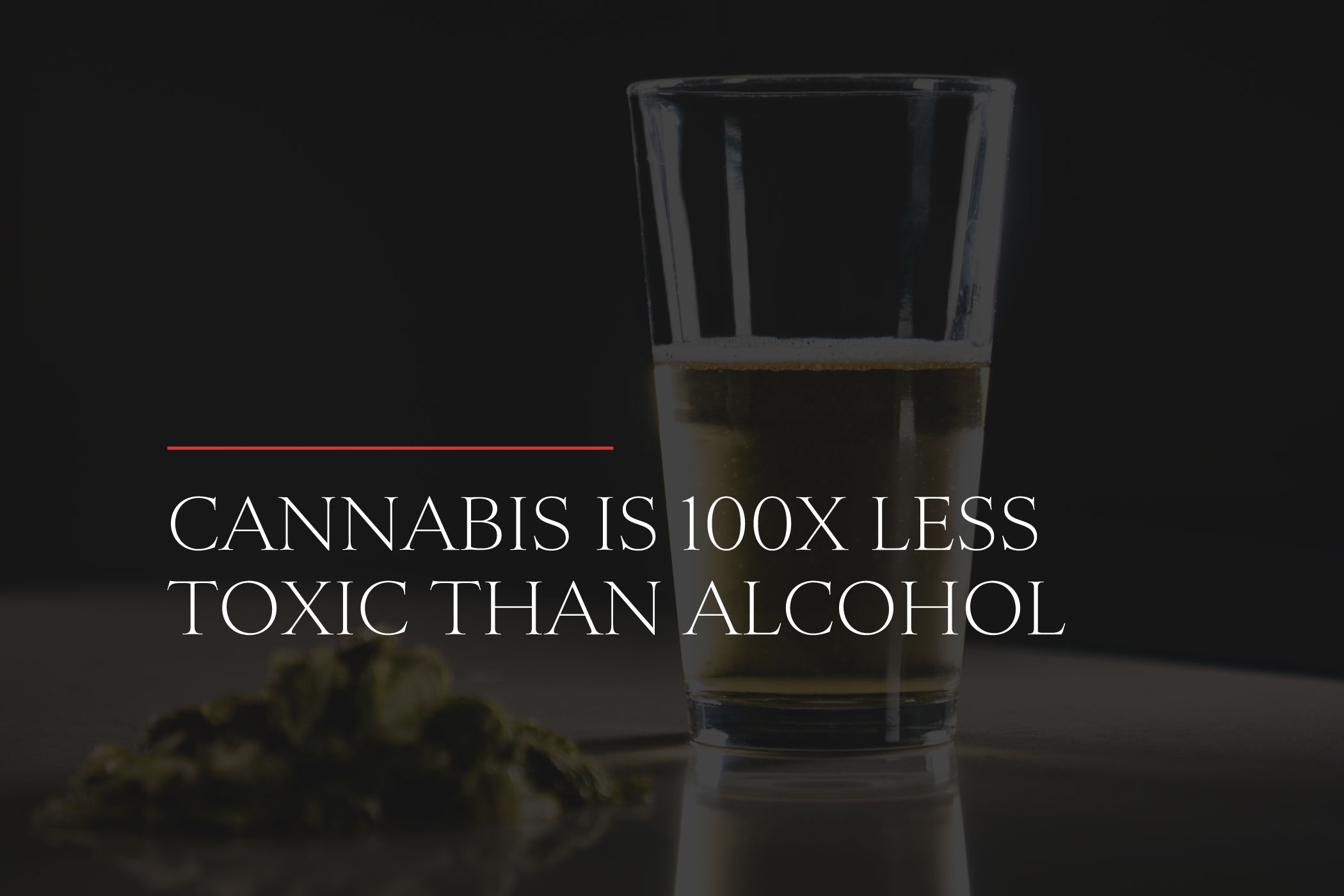 Anything you put in your body comes with risks. Your risk factors depend on a number of factors, including your age, your genetics, as well as how much of any substance you consume and how long you’ve consumed it.

Toxicity refers to consuming levels of anything that becomes poisonous or toxic in your system. Caffeine, for example, has toxicity levels, although lethal overdose is extremely rare. Alcohol has lethal levels, which the National Institute of Health reports as between .35% and .40% blood-alcohol levels.

What’s the lethal dose for cannabis use? There isn’t enough data about deaths from cannabis overuse. However, a cannabis medical expert quoted in Business Insider said you’d have to consume 1,500 pounds in 15 minutes to ingest toxic levels of cannabis.

As cannabis use becomes more commonplace, conversations are arising about the safety and toxicity of cannabis, especially as it compares to alcohol.

Is Cannabis Safer Than Alcohol and Other Drugs?

As more states legalize cannabis for recreational and medicinal uses, we’re learning more about the safety of cannabis as it compares to other drugs. One study found that not only is cannabis safer than other drugs, including alcohol, but it’s more than 10 times safer.

More research is emerging that supports the reality that cannabis seems to be safer than alcohol and other drugs, especially when it comes to direct causes. Deaths directly caused by drugs usually refer to drinking, injecting or otherwise ingesting them; indirect causes include automobile accidents caused by impaired drivers. When it comes to “direct deaths” caused by over-consuming drugs, cannabis doesn’t even make some lists.

Much of the conversation about cannabis safety versus alcohol safety is inspired by a report published in the journal Scientific Reports where researchers studied direct deaths caused by alcohol, heroin, nicotine, cocaine and other drugs. The article suggests several important findings:

Juries are still out in terms of how much cannabis a person can consume before being considered to be impaired. We recommend you don’t drive for at least six hours after using cannabis because not only is driving while under the influence illegal, it could be dangerous.

Comparing Cannabis to Alcohol — Is It Fair?

You might argue that comparing cannabis to alcohol is like comparing apples to oranges. Alcohol is legal, and researchers have been studying its effects for decades. Cannabis, however, has been illegal until only recently, so studies are more limited.

In 2018, researchers looked at hundreds of data sources that studied both population-level alcohol consumption and risks associated with alcohol use (they published their findings in the medical journal The Lancet). They found that globally, alcohol was the seventh leading risk factor for deaths and disability-adjusted life years (that’s scientific  jargon for the number of years people lose due to ill health or disability). Among people age 15 to 49, it was the leading risk factor.

We strongly believe in consumer education — which is why we published our Ultimate Guide to Cannabis Science free for you to read and share. Our resource center has information on everything from how to get a medical marijuana card in Massachusetts, to the vaping-related illnesses and deaths. You can subscribe to our newsletter to become a Happy Valley insider and have fresh cannabis content delivered to your inbox.

Or if you have specific questions about cannabis, contact us directly. Our Happy Valley Hosts are available to answer your questions.