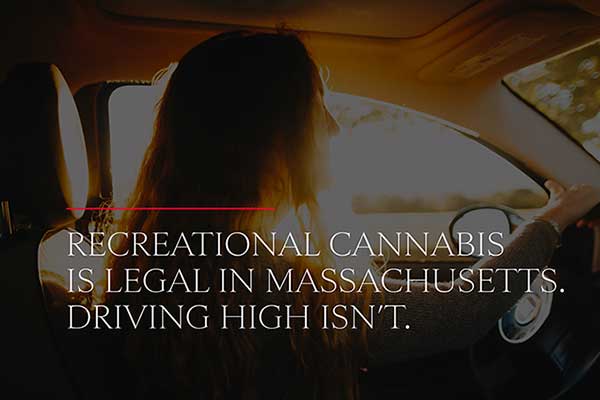 Now that cannabis is legal for both recreational and medical use in Massachusetts, it’s important to note that laws regarding the use of substances while driving haven’t changed.

Driving while experiencing the effects of cannabis is still illegal, just like driving drunk, or after taking certain prescription medications. Like alcohol, open container laws apply to cannabis. It’s important to know the legalities of recreational and medical cannabis, and the consequences of driving while intoxicated or while having open containers of cannabis in your car.

Cannabis is legal in Massachusetts, thanks to voter-approved initiatives and locally enforced rules and regulations. Massachusetts residents have enjoyed access to medical cannabis since it was approved by voters in November 2012.

As of November 2016, residents are now also able to enjoy legal recreational cannabis in the state. Neither of these laws affects current DUI laws. As with alcohol, if you are caught driving under the influence of cannabis or cannabis products, you will be charged with Operating Under the Influence (OUI), regardless of Massachusetts’s recreational or medical cannabis laws.

Driving While Under the Influence in Massachusetts

According to Massachusetts law, driving while under the influence of any intoxicating substance remains illegal.

“Whoever, upon any way or in any place to which the public has a right of access, or upon any way or in any place to which members of the public have access as invitees or licensees, operates a motor vehicle with a percentage, by weight, of alcohol in their blood of eight one-hundredths or greater, or while under the influence of intoxicating liquor, or of marijuana, narcotic drugs, depressants or stimulant substances, all as defined in section one of chapter ninety-four C, or the vapors of glue shall be punished by a fine of not less than five hundred nor more than five thousand dollars or by imprisonment for not more than two and one-half years, or both such fine and imprisonment.”

You may have noticed that while a legal limit is specified for other legal drugs such as alcohol, no such commonly accepted standard of intoxication exists for cannabis. This can make it difficult to prove intoxication, and largely subjective to the arresting officers’ opinions of your level of intoxication.

In lieu of a breathalyzer, these opinions will be based on field sobriety tests and the drug recognition training that officers receive. As many of us know, cannabis effects can vary from person to person, which has made creating a standard of intoxication for cannabis difficult.

A Note on Open Containers

Even if you aren’t intoxicated, you can be charged with “Possession of Marijuana in a Motor Vehicle” and be subject to a civil penalty of up to $500. According to Massachusetts law, you are prohibited from having an open container of cannabis in the passenger area of the car.

“’Open container shall mean that the package containing marijuana or marijuana products has its seal broken or from which the contents have been partially removed or consumed and “passenger area” shall mean the area designed to seat the driver and passengers while the motor vehicle is in operation and any area that is readily accessible to the driver or passenger while in a seated position; provided however that the passenger area shall not include a motor vehicle’s trunk, locked glove compartment or the living quarters of a house coach or house trailer, or if a motor vehicle is not equipped with a trunk, the area behind the last upright seat or an area not normally occupied by the driver or passenger.”

First, the obvious: A lit bowl, joint, blunt that’s being smoked, or a handful of weed in the cup holder constitutes open container.

What may not be as obvious is the “partially consumed” portion, which would include a vaporizer that you’ve had in your pocket and been using on and off all week, a roach, or a half-eaten edible stored in the glove compartment.

Even if you had a pack of five pre-rolled joints, and two are missing, you are violating open container laws. Unlike a six-pack of beer, each joint isn’t considered its own container. Your best bet is to store open cannabis in the trunk or a locked glove compartment and far out of reach of the driver.

As a best practice, when you leave a dispensary, never open up your product in the car. Keep them in the child-proof exit bag you received and open at home.

Every cannabis product that is produced and sold by Happy Valley comes in sealed, childproof packaging and the contents are clearly labeled by serving and weight. We recommend starting slow, with small amounts and low dosages. Always wait until you are in a comfortable place to open and use your cannabis products and to wait at least six hours before attempting to operate a motor vehicle.

Cannabis affects everyone differently. Until you are familiar with how cannabis products affect you, use extra caution and avoid driving or operating heavy machinery until you are confident that the effects have worn off. If you have questions or would like assistance in finding the responsible serving size for you, please contact us for a consultation.

For in-depth insights into how cannabis interacts with the human body, check out The Ultimate Guide to Cannabis Science.