Skip to content
Home » Resources » Massachusetts Dispensaries: The Road to Marijuana Legalization
By Brianna Saputo
Brianna is a Marketing Associate at Happy Valley, writing about all things cannabis. She has a Bachelors Degree in Marketing and loves outdoors, boating and cooking. Her favorite products are Happy Valley Flower and Concentrates.
ShareTweet

In 1911, Massachusetts was the first state in the U.S. to make cannabis illegal when it outlawed “Indian hemp” sales, except by licensed pharmacists on doctors’ prescriptions.

The effort to criminalize cannabis was led by the New England Watch and Ward Society, which was once a powerful organization that led the “public morality” and “Banned in Boston” movements. Their targets included certain books, prostitution, gambling and vice, and, of course, marijuana, according to author Paul C. Kemeny, in an interview with GCC.edu.

Despite our past, Massachusetts is now one of the most cannabis-progressive states. How did we transition from being the first state to restrict cannabis to being at the forefront of cannabis legalization? Take a look at the long history of cannabis laws in Massachusetts to find out.

Timeline of Cannabis Laws in Massachusetts

Timeline of Massachusetts dispensaries for medical use

From 2013 and 2019, between the time the state legalized medical use and recreational use, Massachusetts issued medical marijuana cards to more than 66,000 people:

By March 31, 2019, which is the most recent Massachusetts medical marijuana dashboard reported by the Cannabis Control Commission, 66,945 patients were certified. 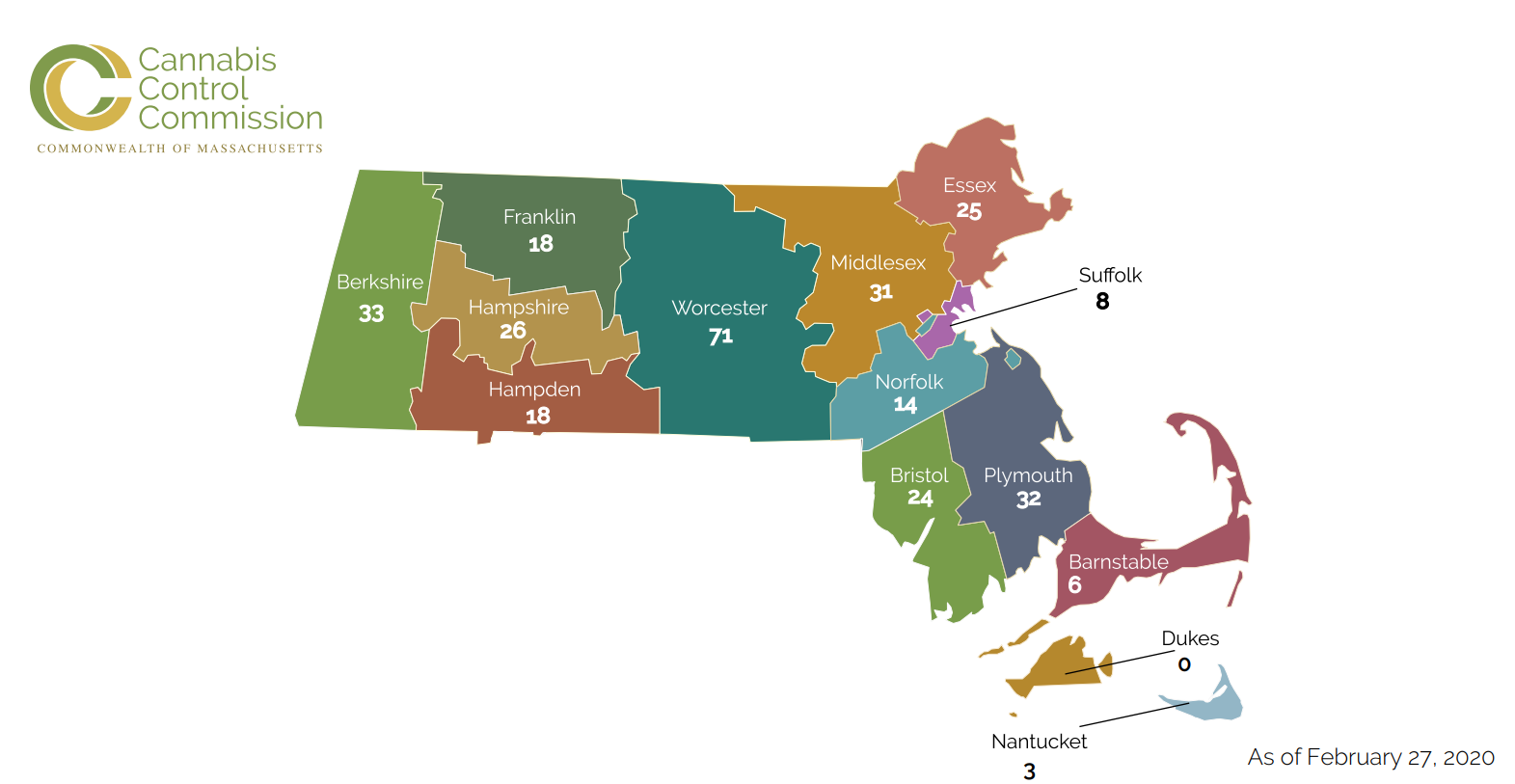 As of January 2020, the commission had approved 258 licenses in Massachusetts. Licenses are issued for one year and must be renewed annually.

Dispensaries must follow strict regulations that include limiting the number of grams of concentrate and ounces of flower that can be sold at a time. And the state still separates adult use from medical use, although dispensaries that are co-located like Happy Valley can cater to both medical and adult-use patients. Both of Happy Valley’s locations will serve medical and recreational customers.

However, cannabis is still illegal at the federal level. In November 2019, the U.S. House passed the MORE Act — Marijuana Opportunity Reinvestment Act, which proposes to remove cannabis from the federal list of controlled substances. To become a law, MORE needs to pass the Republican-led Senate and then be signed by the president. This doesn’t seem likely to happen, but as cannabis advocates we will continue to inform the public and push for change.

You are now leaving HappyValley.org to place an order using a 3rd party delivery service ZypRun. Available products and prices on ZypRun may vary at Happy Valley.

ZypRun delivers only to the following locations: