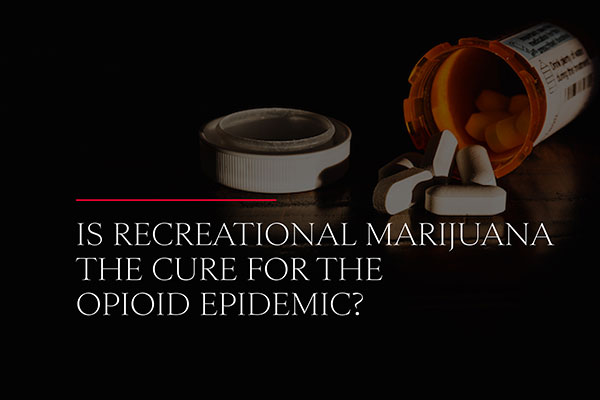 Cannabis is legal in some form or another in 33 states and the District of Columbia, but some still worry about how cannabis is connected to other drug use. In particular, with the opioid epidemic killing an estimated 130 Americans every day, according to the Centers for Disease Control, many wonder: When it comes to cannabis and opioids, could recreational cannabis take the edge off the opioid crisis?

For many years, cannabis was portrayed as a so-called “gateway drug.” According to this point of view, cannabis introduces users to more addicting substances. However, new evidence reveals this is not the case, but that cannabis may help reduce the number of opioid deaths by substituting cannabis for opioids.

Correlation Between Cannabis and Opioid Use

Anti-cannabis advocates have long argued that marijuana puts users at risk for narcotic addiction. The fear was that cannabis users would seek more thrilling highs, or that their exposure to an illegal market would give them access to more potent drugs. New research suggests otherwise.

A 2014 study  of overdoses and legal cannabis from 1999-2010 published in JAMA Internal Medicine suggested that access to medical cannabis programs correlated to a nearly 25% lower than average rate of opioid deaths in states without such laws.

Anecdotal evidence from patients abounds to support these claims, with many moving to states with favorable cannabis laws as “medical refugees” who have replaced one or more harmful prescription opiates with a regular cannabis regimen.

This evidence has met some skepticism from the scientific community. A new study published mid-2019 suggests a weaker correlation between cannabis use and opioid overdoses than initially thought. This study argues that the previous study was a coincidence and that the relationship between opioids and cannabis have been overstated. In contrast to this research, the American Journal of Psychiatry states CBD dampens cue-triggered cravings and anxiety and reduces stress hormones among people living with opioid addiction.

“The intense craving is what drives the drug use,” said Yasmin Hurd, the lead researcher on the study and director of the Addiction Institute of Mount Sinai. “If we can have the medications that can dampen that [craving], that can greatly reduce the chance of relapse and overdose risk.” –Kounang, 5/21

If anxiety and cravings are a contributing factor to opioid dependence, then CBD may lead to a reduction in chronic opioid use and subsequent overdoses. As research into CBD and cannabis is relatively young, it may be too early to say if CBD is the definitive solution to the opioid epidemic. Cannabis research is in its infancy, and in the coming years, we can expect more credible studies into the relationship between cannabis and opioid addiction.

Opioid Use in the United States

According to the National Capital Poison Center, the opioid epidemic began around 1991 when a surge of overdose deaths followed an uptick in opioid prescriptions. Since the 90s, opioids have become a preferred treatment option for chronic pain and have helped countless patients recover from surgeries and accidents, and live with ongoing symptoms. According to NCBI, Purdue Pharma’s promotional materials misrepresented the risk of addiction, and claimed there was a “less than 1% chance of addiction.”

Despite the opioid manufacturer’s business collateral, opioids are the leading cause of accidental death in the US, with 52,404 lethal overdoses in 2015. The CDC reports 218,000 prescription opioid overdose deaths in the United States between 1999 and 2017. Baby boomers and millennials are at the highest rate for addiction and overdose, according to research by Columbia University’s Mailman School of Public Health. The study suggests that baby boomers experience 25% more deaths from opioid overdose and millennials experienced about 20% more deaths from opioid overdoses, compared to those born between 1977 and 1978.

The economic impact of opioid addiction

On top of the massive death toll and crippling addiction problems brought on by opioids, the Organization for Economic Cooperation and Development (OECD) found that opioid addiction has a tremendous effect on the US economy. Lost wages and productivity from death, incarceration, and decreased productivity amount to $40 billion annually. The White House Council of Economic Advisers suggests the total cost of the opioid crisis is over $504 billion.

Cannabis as an Opioid Alternative

The primary application of opiates is for pain treatment and management. Cannabis has been shown to also offer an analgesic effect and can sometimes be taken in lower doses when administered via inhalation or topical application rather than oral administration, as the digestive tract is not involved in introducing cannabinoids into the body.

A study published in the International Journal of Drug Policy found that patients prefer cannabis to painkillers like opiates when treating chronic pain. THC, even at low doses, has been found to be effective at blocking pain receptors and dulling uncomfortable sensations, making it a promising alternative to opiates, according to a 2013 study in the Journal of Pain .

Thanks to the recreational legalization of cannabis, those looking to move away from opiate treatments can access cannabis without the need for a prescription. Previously, medical patients had to meet specific criteria for access to certain cannabis products. Currently, there is no registration, no list with your name on it, and no one has to know if you are simply curious about how cannabis could replace the opioids that your doctors are prescribing.

Cannabis has the potential to reach a greater amount of people and offer the analgesic benefits that it possesses without the risk of addiction, overdosing, or complicated drug interactions.

Cannabis Could be Your Alternative to Opioids

While opioid use remains on the rise, cannabis is becoming an increasingly-accessible pain treatment alternative without the potentially deadly side effects. If you’re considering cannabis as an alternative or supplement to your existing treatment regimen, schedule a consultation with our knowledgeable staff who can help guide you to products that may suit your needs.

For more information on cannabis, the endocannabinoid system, and how to get the best cannabis experience read our free guide, The Ultimate Guide to Cannabis Science.