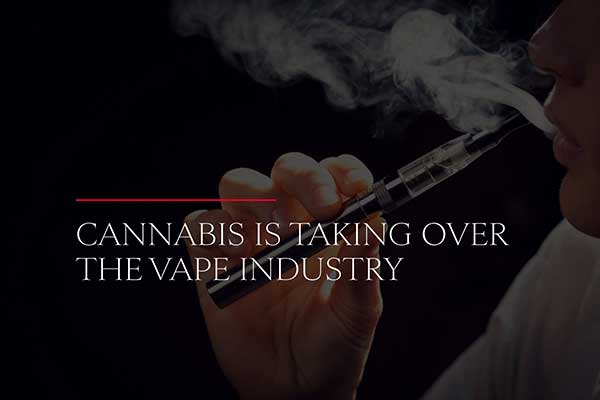 The Rise of Cannabis Vaping

For years, the vape industry was primarily dominated by flavored nicotine products, dating back to the early 2000s when products like e-cigarettes became popular and were pitched as a way to quit cigarettes and bypass smoke-free legislation being passed around the country and the world. Cannabis consumers took note and began utilizing the same technology to consume cannabis.

While e-cigarettes and vaporizers have become a focal point in the news as more consumers and young adults trend towards their use than cigarettes, the electronic vaporizer is nothing new, dating back to the 1930s.

The first patent for an electronic vaporizer was filed by Joseph Robinson for medicinal use. Years later, in 1963, Herbert A. Gilbert would file a patent for a smokeless cigarette, the idea being to offer a safe alternative to combustion of paper and tobacco.

E-cigarettes and vapes gained traction in the 1990s, with companies applying for patents for cigarette substitutes. It wasn’t until 2004, when the first e-cigarettes were introduced into the Chinese market, that these devices began to gain popularity in Asia, Europe, and, eventually, the United States. Many of these countries have since introduced legal cannabis vaporizers that contain minimal amounts of THC.

Coincidentally, this was right around the same time that legal medical cannabis began to take hold nationally, starting in California in 1996. As legal cannabis spread, more time and research was put into methods of consumption. Many had been vaporizing cannabis flower in tabletop devices, but handheld vaporizers were rudimentary and primarily focused on allowing consumers to vaporize small amounts of cannabis concentrates, or dabs.

With the widespread availability of concentrated cannabis, consumers could take a few puffs from a water pipe or handheld vape, and would feel the effects as if they had smoked an entire bowl or joint. Early cannabis vapes utilized hot titanium coils and cotton threads, similar to the nicotine vapes of the time, to draw viscous cannabis oils into a heating chamber and deliver a combustion-free mouthful of vapor.

Cannabis Vapes Have Evolved with the Market

Unlike nicotine vapes which were primarily self contained “pods” (a term coined by electronic vaporizer company Pax Labs) of nicotine liquids, cannabis vaporizers were “single shooters” that had to be reloaded after each use, and often became messy with resin. As time has passed, the technology behind cannabis vaporizers improved, reducing leaking problems and moving away from the harmful glues, fibers, and metals of the early vaporizers.

As more tests have been done on these products, residual heavy metal and additives like PGP and PEG have been phased out due to improvements in cannabis vaporizer cartridges and a higher level of education among vape consumers, who are more aware than ever about what goes into the cannabis products they consume.

We are now accustomed to seeing cannabis pods or cartridges that are pre-filled with products like distillate and CO2 oils, as well as solventless options created with mechanical separation techniques. As cannabis products have advanced, vaporizers have become more sophisticated. Newer devices are changing the way vape consumers enjoy their products, allowing individuals to experience cannabis vapor as they would a fine wine or with the precise dosage of a medical device.

Ask Us About Cannabis Vapes

Today we see brands focusing on improvements to vape formulations, extraction techniques, and cartridge technology that allows consumers to enjoy a reliable, discreet, and enjoyable cannabis vaping experience. Whether you’re new to cannabis or an experienced connoisseur looking for a new way to enjoy your favorite cultivar, vaping may be the best option for you. Consult with a Happy Valley Host for recommendations on products that may suit your needs.

To become a Happy Valley Insider, join our mailing list by entering in your email address at the bottom of the page.