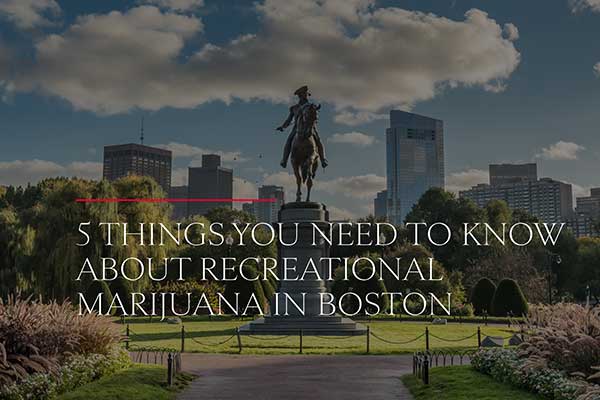 As recreational marijuana (also referred to as adult use) laws take effect in Massachusetts, you may have some questions as to what this means for Boston’s residents and tourists, along with the rest of the state. The most important point to note is that marijuana is now legal for adults 21 and over. All you need is a government-issued ID proving you’re of age, and you’re good to go. Also, if you’re already a qualifying medical marijuana patient, nothing changes! Recreational laws do not affect medical laws.

With that being said, there’s a few other things you need to know about recreational cannabis in Boston:

1. The difference between medical and adult use (recreational) cannabis

Medical cannabis was approved by Massachusetts voters in November 2012, and allows patients with certain qualifying debilitating medical conditions to possess, purchase and cultivate cannabis for personal, medical use.

Recreational marijuana was voted on in November 2016, with additional regulations passed in 2017 and 2018 that allow only a handful of recreational dispensaries to open, compared to the nearly fifty registered medical marijuana dispensaries. Additionally, recreational consumers have to pay taxes on their cannabis products, whereas medical patients are exempt from the additional taxation.

In Massachusetts, adults over the age of 21 are allowed to possess a personal and residential amount of cannabis.

Limited to one ounce of flower, or five grams of concentrate and/or infused products.

Limited to ten ounces or ten grams of concentrates, plus harvests from personally grown plants, so long as anything over one ounce is kept locked up until needed.

Personal possession would refer to the amount you have on your body at any time, either in a pocket, bag, or in your car (more on that in #4). Your residential possession limits apply to the entire residence, allowing you to securely store yields from your plants, and up to a sixty day cannabis supply. Additionally, it is legal for adults to be “giving away or otherwise transferring without remuneration up to 1 ounce of marijuana, except that not more than 5 grams of marijuana may be in the form of marijuana concentrate, to a person 21 years of age or older, as long as the transfer is not advertised or promoted to the public.”

While the state may have adult use possession laws, its stance on consumption remain strict: public consumption is illegal. Boston has specifically made it illegal to smoke tobacco or marijuana in public parks, workplaces, bars, and restaurants. Breaking this law will result in a civil penalty and up to $100 in fines, regardless of whether it is medical or recreational use. In spite of this regulation, the Boston Freedom Rally has been thrown every year since 1989 and encourages a little civil disobedience in celebration of the plant.

As residents of Boston and the state of Massachusetts, adults are allowed to grow up to six plants with no more than twelve plants per household, regardless of how many adults live there. If you’re a medical patient with a qualifying hardship, that limit is loosened, but patients are advised to grow within their recommended 6-day supply. Personal grows must be locked, and cannot be publicly visible without the aid of binoculars or aerial surveillance.

One of the best aspects of Massachusetts law is that you are allowed to keep everything you harvest from your 6-12 plant grow, even if it exceeds the 10 ounces you’re allowed. Once you have your harvest, you must keep it secured and out of public view. State law prohibits processing (extracting) cannabis using most solvents with the exception of alcohol. This means that recreational personal processing is limited to mechanical extractions such as rosin and water hash, or ethanol extractions such as distillate.

As with alcohol, driving under the influence of marijuana remains illegal under state and local laws, regardless of whether you have a medical recommendation or not, and will result in an Operating Under The Influence (OUI) charge. Similarly, driving with an open container of cannabis will get you into hot water as would driving with an open bottle of alcohol. The state defines an “open container” as a package with a broken seal, or a portion of the contents missing (a five pack of joints that only had three joints left in it, for example). If it’s open, keep it out of reach, locked in the glove box, or the trunk.

For more info, check out our post “Everything You Need to Know About Driving with Cannabis in Massachusetts”

5. Massachusetts has more protection than other states

Unlike other states with legal cannabis programs, Massachusetts has stepped in and specifically established protections for patients, landlords, tenants, and parents. According to state law, landlords cannot be subject to criminal penalties or forfeiture for allowing tenants to participate in state-legal cannabis activities. Tenants can be restricted from smoking cannabis, but cannot be restricted from consuming other forms of cannabis. Lastly, patents cannot be denied a medical procedure, including an organ transplant, due to their use of cannabis, nor can a child be removed from the custody of a parent or guardian solely on the basis of cannabis without “convincing and articulable evidence” that it is negatively impacting the situation.

The legalization of cannabis for adult use has wider implications than individuals and their ability to partake. Supporting a legal cannabis market minimizes the financial hold that black market dealers hold over communities. By allowing legal access to a plant that is in high demand, cities like Boston will see an increase in revenue from taxes that can go to solve fiscal problems in areas like education, city planning, and criminal justice reform.

We’re excited to be a part of beginning a new, legal chapter of recreational cannabis use in Massachusetts. To see which cannabis products might suit your needs and lifestyle, schedule a consultation at our Happy Valley Boston location.