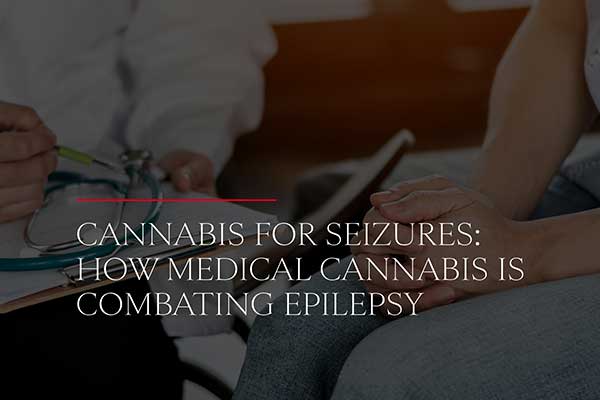 Nearly 3.4 Million people in the United States are affected by epilepsy, and more than 65 million worldwide. Epilepsy is the fourth most common neurological condition, and a rising number of people are using CBD and cannabis for seizure relief.

Until recently, seizures and other symptoms of epilepsy were treated solely with pharmaceuticals, many of which have drastic side effects. As medical cannabis and hemp-derived cannabinoids have become easier to access and study, many are turning to these alternatives for treatment and seeing some exciting results. The FDA has even gone so far as to approve an oral solution containing cannabidiol (CBD) for the treatment of two specific types of epilepsy syndrome, Lennox-Gastaut Syndrome and Dravet Syndrome.

What are Seizures and What Causes Them?

According to the Epilepsy foundation, “A seizure is a sudden surge of electrical activity in the brain.” This surge is responsible for changes in a person’s behavior during a seizure, though the body is capable of its normal functions during the seizure.

About 1 in 100 people in the U.S. has had a seizure or been diagnosed with a form of epilepsy. New cases of epilepsy are most common in children and those over the age of 55, but half of the people who experience a first seizure will experience a second within six months, and this percentage increases exponentially with frequency. Seizures themselves are not diseases, but rather a symptom of different brain disorders; some are barely noticeable, while others can be debilitating.

Seizure causes vary greatly by person, specifically by each person’s age. About half of the people with epilepsy do not know the cause of their disorder. For some, seizures come from a genetic trait that is passed down among generations, for others, a predisposition to autism spectrum disorder may be what led to the onset of epileptic seizures. In older adults, strokes are the most common cause of seizures.

According to the Epilepsy Foundation, the most common causes of seizures by age are:

Common causes of seizures in newborns:

Common causes of seizures in infants and children:

Common causes of seizures in children and adults:/h3>

Common causes of seizures in seniors:

The FDA has approved one oral solution containing CBD for the specific application of the two syndromes mentioned. Other than those specific use cases, the FDA has not yet approved cannabis or cannabinoids for use in the treatment of seizures. Instead, a typical treatment regimen includes pharmaceutical anti-seizure medications, diet therapy, and even surgery.

Many of these treatment options necessitate additional prescriptions to offset the side effects of the initial treatment. Cannabis and CBD offer a way out of this cycle, often reducing or eliminating the need for pharmaceutical remedies.

For years, many have relied on anecdotal evidence to support the efficacy of cannabinoid therapy as an alternative to pharmaceutical treatments. Now, we are seeing the science to back these claims up.

Studies have shown that while medical cannabis that is high in THC may actually provoke or worsen seizures, cannabidiol has a better anticonvulsant profile and is largely devoid of adverse psychoactive effects and abuse liability. Multiple placebo-controlled studies found CBD to be superior to the placebo in reducing the frequency of convulsive seizures. Additional studies have shown a more than 50% seizure reduction after the introduction of cannabinoids as adjunctive epilepsy treatments. Charlotte’s Web and other high-CBD, low-THC cultivars have shown promise in treating  some forms of epilepsy.

Many researchers warn that evidence of support for medical cannabis and CBD efficacy is largely anecdotal on an empirical basis as clinical trials and further studies are still largely restricted, due to cannabis’s scheduled status as a controlled substance.

For the first time, the FDA has approved a plant-derived cannabinoid medicine for the treatment of for LGS and Dravet syndrome. According to Christina SanInocencio, Executive Director of the Lennox-Gastaut Syndrome Foundation,

“EPIDIOLEX is a much-needed new treatment option for patients with LGS, a rare and severe form of childhood-onset epilepsy that typically persists into adulthood. Despite the use of multiple epilepsy treatments, the majority of LGS patients continue to have life-long, debilitating seizures and our community welcomes the availability of a new, first-in-class treatment option.”

Check with your doctor

Before rushing into treating your symptoms with cannabis or CBD, it’s important to consult with your doctor. Talk to your doctor on how cannabis or CBD treatments could improve your quality of life and impact your current treatment regimen. Cannabis and CBD products may have unknown side effects, and it is important to discuss the benefits and risks of using alternative treatments for these types of conditions. There may also be some drug interactions that are worth discussing if you are on valproic acid (VPA) or clobazam (Onfi).

While the 2018 Farm Bill legalized hemp products and their derivatives (including CBD), medical cannabis is not yet legal in all areas. If you live in an area with legal cannabis such as Massachusetts, talk with your local cannabis providers about current product offerings that would be best suited for your needs, as well as recommendations based on other patients’ success stories.

As you approach cannabinoid therapy as an alternative for any medical treatment, it is extremely important to start slowly, with low doses and to make notes or keep a journal of what works and what doesn’t. Each of our bodies has a unique endocannabinoid system that will react differently to specific cannabinoids, terpenes, and combinations thereof.

If you’re considering using cannabis or cannabinoid-infused products to help with epilepsy or seizures, consider consulting with Happy Valley’s knowledgeable staff members. Our team can help you find options for your specific needs and offer guidance in the ever-changing legal cannabis industry.