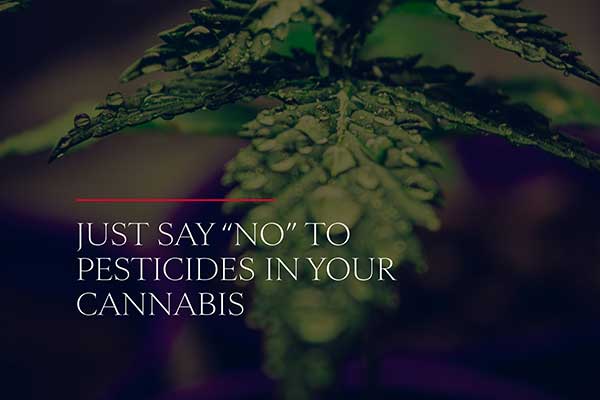 As legal cannabis grows more popular across the nation and globe, advocates affirm that legalization will yield cleaner products than those produced in the unregulated black markets of years prior. What many don’t realize is that this progression is gradual, at best.

Cannabis enthusiasts may not realize that pesticides are present in much of the cannabis on both regulated and unregulated markets. Governments have only begun to research the potential dangers of pesticides in cannabis.

Prevalence of pesticides in cannabis

Pesticide use in cannabis cultivation has been common practice for years, and there is no guarantee regulation will put an end to it. As cannabis has long been confined to the black market, growers were never held to standards and Approved Products lists, and pests were dealt with expediently.

“The problem is, you’re going from essentially a completely illegal industry to one that is legal and highly regulated, and it’s a transition. Getting rid of some of the bad habits is going to take a bit of time,” suggests John Coleman, co-founder and president of cannabis testing lab Anandia Laboratories. These expedient, potentially harmful habits have carried into the legal market as well.

In the years since legalization in Colorado and Oregon, regulations are developing, as legislators and the public become better informed on the risks of using pesticides. In the State of California, more than 30% of test samples test positive for pesticide contamination, even after regulatory approval.

Other times, residuals and contaminants found in tainted products are the result of approved use in another industry. Grapes grown with pesticides, which are then converted to grapeseed oil and used for cannabis infusions and edibles, may test positive for contaminants. Often, products with pesticides that do not exceed maximum residue limits make it onto the regulated market.

Why pesticides are used in cannabis

Cannabis is a crop. Like any agricultural crop, cannabis attracts various pests, including spider mites, aphids, caterpillars, and gnats. Pesticides have been used for thousands of years to control agricultural output, and specific formulations have been created to target spider mites, powdery mildew, harmful fungi, and molds.

These formulations often contain ingredients such as myclobutanil, a fungicide used to combat powdery mildew, and bifenazate, a pesticide that wards off spider mites. These substances can be extremely harmful when ingested and inhaled. Myclobutanil has a long history of use in the grape industry, and is often sold as “Eagle 20.”

The risk of pesticides is heightened when it comes to infused products and cannabis concentrates, as extractions may contain residuals of pesticides. Even biopesticides and “organic” options like neem oil can leave a residue on the plant material, that may be found on the end product.

Countries like Canada test for 96 pesticides, only 23 of which are approved. Others, like Colorado, have an ever-growing list of pesticides that are allowed for use (currently, the list is 40 pages long). Massachusetts does not have a currently available list of approved pesticides for cannabis, but it maintains required testing for the following prohibited pesticides, insecticides, and fungicides:

Why are pesticides bad for you?

The dangers of inhaling pesticides are uncertain. With legalization, we are beginning to understand how exposure to certain pesticides like myclobutanil are harmful, but we have yet to see the long-term (30-, 40-, 50+ year) effects of even those residuals meeting “acceptable” limits. This particular field of study is relatively young, and lacks the funding needed for effective science.

Despite the lack of research on inhaling pesticides, inhaling cyanide (a byproduct of certain pesticides) has been determined to be harmful. Medical cannabis patients in Canada have filed class-action lawsuits against regulated cannabis providers surrounding the rampant contamination of products, and the potential health issues that may ensue. Goods produced from pesticide-laden cannabis may be even more harmful, as those residual traces can be concentrated.