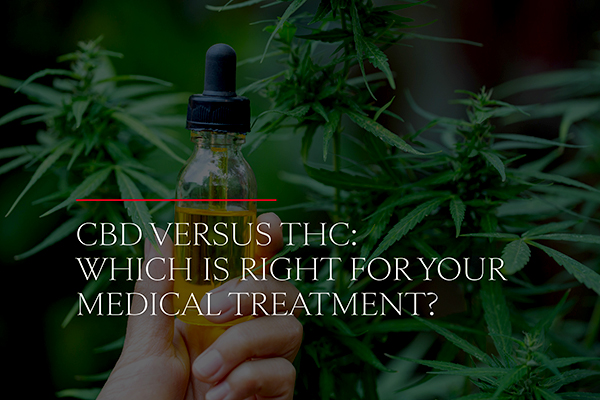 As you familiarize yourself with cannabis as a medical treatment, it becomes necessary to learn more about the plant and the cannabinoids at play. This article compares the benefits and drawbacks of the most-talked about cannabinoids, Tetrahydrocannabinol (THC) and Cannabidiol (CBD), as well as offering consideration for the “Entourage Effect,” and how cannabinoids can interact with one another. Each of our bodies respond differently to cannabinoids, and knowledge of your options empowers you to make educated decisions about your medical treatment.

THC is the cannabinoid that determines whether your cannabis plant is legal industrial hemp, medical cannabis, or recreational cannabis. THC is one of the primary cannabinoids that acts on the body’s endocannabinoid system, interacting with cannabinoid receptors (CB1 & CB2). Specifically, even in products containing less than 2% THC, THC has been found to relieve pain by blocking pain receptors. It also functions as a muscle relaxant and anticonvulsant. Additionally, THC and its synthetic counterpart Marinol have been found to aid with nausea that often accompanies treatments for cancer. THC has shown efficacy as a neuroprotectant, sleep aid, antibacterial, and appetite stimulant. Additionally, THC cannot cause an overdose.

A 1975 study published in the Journal of the National Cancer Institute revealed a promising relationship between THC and tumor reduction.

“Δ9-THC administered daily for 10 days significantly inhibited Friend leukemia virus-induced splenomegaly by 71% at 200 mg/kg as compared to 90.2% for actinomycin D. Experiments with bone marrow and isolated Lewis lung cells incubated in vitro with Δ9-THC and Δ8-THC showed a dose-dependent (10−4–10−7) inhibition (80–20%, respectively) of tritiated thymidine and14C-uridine uptake into these cells.”

More recent studies have shown THC kills brain cancer cells, and elicits an anti-tumor effect in mice. THC is not a cure for cancer, but has unlocked some innovations in treatment options, and will likely continue to inform future cancer research.

Unlike products containing THC, those containing CBD are legal in almost every state. While the 2018 Farm Bill legalized hemp products (including cannabinoids like CBD that can be derived from hemp), some states have their own laws regarding CBD. Fortunately, Massachusetts has legalized recreational and medical cannabis, in addition to federal legalization of hemp, which means CBD in a variety of forms is more than accessible to residents.

Like THC, CBD can be used for a wide variety of applications. CBD has been shown to alleviate symptoms of anxiety, and is an excellent anxiolytic option for patients with social anxiety disorders such as PTSD. Cannabidiol can reduce anxiety in subjects, along with antipsychotic effects, with a relative lack of adverse side effects.

Additionally, studies suggest CBD could have medicinal benefits in the treatment of inflammation, diabetes, cancer, and neurodegenerative diseases. Studies have shown that CBD can help prevent the spread of cancer, treat the causes of acne, and has also shown promise in treating substance addictions, namely efforts at opioid and tobacco cessation.

Recently, the FDA has approved a CBD drug for use in the treatment of Dravet and Lennox Gastaut Syndromes.

The Entourage Effect is a theory that cannabinoids work best when working together, rather than in isolation. Studies have shown that, when used together, CBD mitigates the adverse effects of THC such as increased pulse rate, strong psychological reactions like anxiety, as well as helping to mitigate intoxication and sedation.

According to a 1974 study in the European Journal of Pharmacology,

“30 mg Δ9-THC alone increased pulse rate, disturbed time tasks and induced strong psychological reactions in the subjects. 15–60 mg of CBD alone provoked no effects. On the other hand, CBD was efficient in blocking most of the effects of Δ9-THC when both drugs were given together. CBD also decreased the anxiety component of Δ9-THC effects, in such a way that the subjects reported more pleasurable effects.”

CBD has been found to increase the clinical efficacy of THC while reducing negative side effects, suggesting that products with blended ratios of both cannabinoids would likely prove more effective than either cannabinoid independent of the other. This mitigation also allows individuals to consume higher levels of cannabinoids that has provided evidence of the efficacy of other treatments involving cannabis.

The best way to find out which cannabinoid combinations work for your needs with the least side effects is to familiarize yourself with the effects and appropriate dosages. Titration, or the gradual adjustment of how much is being used, can be an excellent tool, especially as you experiment with different cannabinoid ratios such as 100% THC, 100% CBD, 20:1 CBD:THC and 1:1 CBD:THC.

For assistance selecting the appropriate products for your needs, contact Happy Valley to see which of our cannabis products will suit your own unique needs the best.